So Stressed – “THE UNLAWFUL TRADE OF GRECO-ROMAN ART” Review 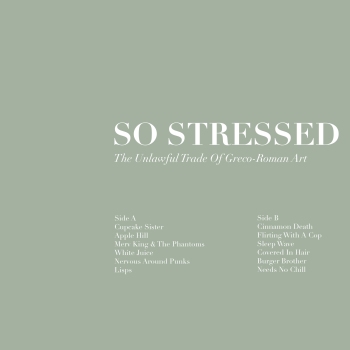 I won’t regurgitate too much about what I mentioned in my review of their last album, but So Stressed are a chaotic and noisy three-piece from Sacramento, California. Needless to say, their debut “Attracted To Open Mouths” made it into my top picks of 2014 and is still something I regularly listen to thanks to its seamless changes from pure noise and aggression to some of the catchiest choruses I’ve heard in a long, long time. However, things have changed in So Stressed’s sound since then…

With “The Unlawful Trade Of Greco-Roman Art”, So Stressed are much more relentless in their aggression in terms of pacing through the whole album, the electronics side of it isn’t at the forefront like with “Attracted To Open Mouths” and is more concentrated on guitars, drums and vocals – although the electronics to pop up now and then, but more under the surface. However, just like the previous album, So Stressed still has that hair-rippingly… stressed… delivery with a sense of humour lurking throughout.

This is seen straight off with the opening track Cupcake Sister with its jumpy drums, hooking guitars and the chorus vocals ‘You’re somebody’s daughter / Build a bridge!’ just become infectious and lodges itself in your brain. This is also the sign of a slight vocal change (which continues for the whole album): they’re more aggressive and frustrated now, leaning more towards a hardcore angst, although the satirical feeling is still there. Apple Hill carries the driving pace and feels like a second-half to Cupcake Sister, but is individual enough to remember, especially with the chorus and more prominent electronics.

Next is Merv King & The Phantoms, the single, which speeds things up to basically a hardcore punk song (with the noise influence, obviously), especially with the flurrying drums while the guitars and electronics flow at their own pace, a really nice contrast. The vocals sound especially strained and desperate here. White Juice carries on a similar aesthetic, but Nervous Around Punks brings a change, with aggressive stop-start bursts before crashing into a slow-paced jam as lyrics like “I just wanna come my hair / And wear a good shirt tonight / I just wanna go back home”, before a weird vocal sample creeps under some unnerving sounds, then returning to the noise of before.

Sixth track Lisps has a real Lightning Bolt feel about it for the verses, while the spiteful chorus menaces itself into your memory. Cinnamon Death returns to the hardcore vibe and pace, and it’s continued by Flirting With A Cop, although it brings back the guitar chaos that was signature on “Attracted To Open Mouths”, and it’s this track that bears most resemblance to what fans might have expected from this album.

Sleep Wave, unfortunately, feels a little bland in comparison with the earlier songs that play in the same style, and so it’s only the lyrics that stand out. However, Covered In Hair comes in as a storm rolling drums and cymbals, with a minimal unison between electronics and guitar. The lyrics and vocals are extra dramatic here, especially with the chorus “If everything was quiet / If everything was quiet / I could get back to work”. Like with Nervous Around Punks, this track has a sort of interlude of ambience that takes up the majority of the track, easing its listener only to burst back in at the end with the chorus, catching you off guard.

Burger Brother presents more noise rock carnage before the closer Needs To Chill, which is so lethargic and careless, it’d be easy to mistake it as an unknown Pissed Jeans track until the vocals come in. Being the longest track on the album, it manages to progress through a few stages, recapping over the styles that So Stressed have thrown at you.

Basically, this is an album that you really have to listen to in a single go. Granted that there’s a good number of catchy numbers here but a fair few of them feel like a co-dependent half to each other: if there wasn’t a tracklist, it would be easy thinking that the album only has half the number of songs than it actually does. Whether that’s a good or bad thing is probably down to personal taste. So Stressed have released another original collection of tracks – maybe not as distinctive as “Attracted To Open Mouths”, but enough to play around in your head.