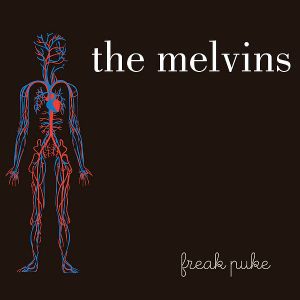 Melvins, as you should probably know already if you’re inclined to rock music, are one of the most iconic bands in experimental rock of the past 29 years, delving in areas of metal, grunge, sludge, doom and even drone – while doing covers of KISS and Dies Isrea, the infamous theme for The Shining. From putting out albums made of songs that rarely step over the 2-minute mark (“Ozma”) to a lengthy drone-doom 6-song album (“Lysol”), Melvins are not about the ordinary and predictable, and continue to defy what even their own fans might expect. “Freak Puke” is their eighteenth album and their second release of 2012.

There is also an issue about the band and this album that should be mentioned first. This is not, apparently, a Melvins album, but a ‘Melvins Lite’ album. The difference? Well, guitarist/vocals Buzz Osborne and drummer/backing vocals Dale Crover are still there; however the quartet is a trio in this. Big Business musicians Jared Warren (bassist/backing vocals) and Coady Willis (drummer) aren’t in Melvins Lite, and instead features ex-Mr. Bungle bassist Trevor Dunn. For those who know the music of Mr. Bungle, it becomes obvious that Melvins (Lite) might approach a new level of bizarre than before.

Opening track Mr. Rip Off starts with one of the most morose and depressing sounds ever heard on a Melvins record. An upright bass is played slowly with a bow, along with trickling sounds that makes you think of a creeping spider while these quiet and pained vocals wail in the background as strings scrape into motion and slowly build. Almost something you might expect from Oxbow. But then the drums kick in and we enter familiar Melvins ground with some spacey sounds, like if Black Sabbath played psychedelic rock.

Inner Ear Rapture jumps in with with more bipolar upright bass and bow, feeling like a dark interlude more than a full song. Baby, Won’t You Weird Me Out features the pretty standard rockin’ Melvins riffs, however the mix with the upright bass brings in a different dynamic as you hear the slaps and the bow, changing between the two in mind-bending ways. The ending however, is just a full on breakdown between the drums and bass, both are just frantic and tackling with each other before being cut by feedback that sounds like a heart monitor going flat.

Worm Waltz Farm features a much thicker guitar tone than the previous tracks and feels more straight-foward, perhaps people who prefer the classic Melvins sound will appreciate. The bowed-bass mid-way through the song is a lot more organised, with some synth-sounds coming in and Dale takes over the vocals for the latter half. However, this is kicked away right before the end as the bass almost cracks, literally sounding like it is cracking under pressure of trying to stay sane. Then A Growing Disgust comes in with this slow and sludgy riff. It generally keeps along to the slow and mournful sound, a very soothing contrast to every track before.

Then we have two tracks that hover around the 2.30-2.50 minute mark, the first being Leon vs. The Revolution. Buzz just shouts in bursts about a boy called Harry, whose father was a cowboy who wants a golden gun but owes money to a monkey called Murder, while these abrasive bluesy-sludge riffs roll on. The second song, Holy Barbarian, is a lot quieter and has this psychedelic sound, like what a spirit trapped in a bong pipe might sound like. After that, we’re hit with the title-track, which features this really dirty and fuzzed-out guitar wah-ing (sounding something that you would expect on an Eagles Of Death Metal song… yes, really!), and Buzz jumps in with snarls while backing vocals and claps jump in and out through the track. It almost has this swing-like feel to it, like an old rock-n-roll and blues song.

Next up is a cover of the Paul McCartney & Wings song Let Me Roll It. In terms of the cover, Melvins pretty much follow it by the note, but this version sounds like the ballad of a weeping giant. It just sounds so BIG in contrast to the original, loads of reverb and layers, and the chorus just sounds apocalyptic – proving that Melvins really don’t know how to make a bad cover.

Lastly, we meet the longest track clocking at 9.40 minutes: Tony Goes Beserk, which has this very Fugazi-like intro – quiet and clean chugged licking riffs, rolling hi-hat and soft vocals. Eventually it swells into this old prog rock sound, something that you’d expect to be played in an 70’s American action film during a car-chase scene where a loveable criminal speeds down an empty highway sweeping in and out of traffic from the police. However, after a blistering solo, we are brought back to the sounds that opened up the album. The droney bow-bass returns, snapping away the upbeat feelings of before, and dropping a curtain of anxiety and maybe even horror.

After a brief silence, these looped vocals come out of no-where. The first are like squawks, the next is a confusing mixture of yaps and a person gurgling… which is a very confusing end to an album, almost meaning to lure the listener to find some meaning to it.

So “Freak Puke”, to put it simply, is a journey. However, it’s really not a journey that tests your patience and wades in and out of your concentration. It’s an album that truly grabs your attention and won’t let you get away, almost seductively rather than forcefully. Buzz’s guitar just sounds so graceful throughout despite being aggressive at times, while hearing Dale Crover on his own again really highlights just how intricate a drummer he is and constantly pushing the possibilities on a kit. As for Trevor Dunn… it’s a wonder why the trio hadn’t recorded an album together before. His extravagant approach to the upright bass fits into the madness, maybe even pushing it slightly, as it really seems like an entity of its own on this album.

If you’re a long-time of the Melvins, there’s simply no reason you shouldn’t enjoy “Freak Puke”.